SOTA activation of the Wurmberg and Brocken in the Harz mountains 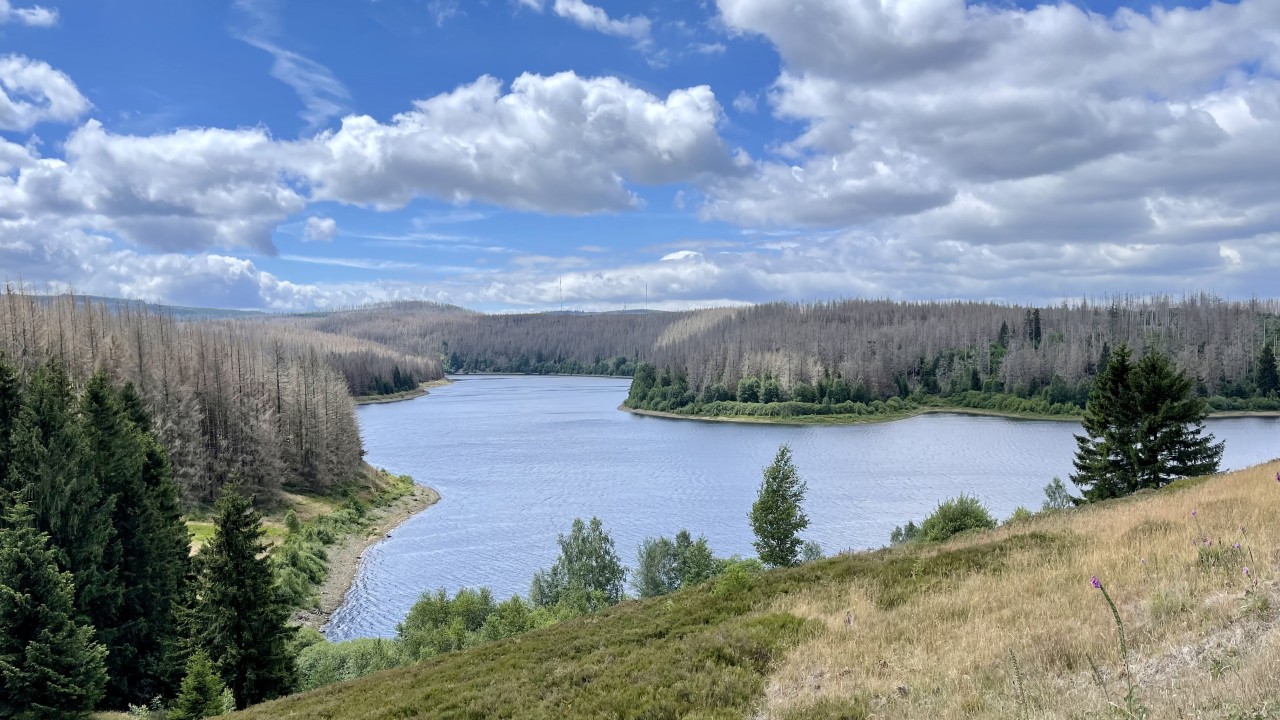 It was time again - a hiking training weekend in the Harz mountains was on the agenda to prepare for my upcoming trekking tour in Slovenia. Although I have been hiking the Harz mountains for a long time, this time was the first time in my new role as a ham. On these hikes in the Harz mountains I prepare myself mentally and muscularly for the high mountains but I also test my hiking equipment. There is hardly anything worse than to discover on a tour of several weeks that the new socks chafe, the seam on the merino underpants pinches or some technical part does not work. So this weekend also my lightweight SOTA equipment should be tested for outdoor suitability and at the opportunity I wanted to activate the Wurmberg and the Brocken.

I started early on Saturday in Bad Harzburg on the hiking trail towards Molkenhaus and on towards Torfhaus. Since the Molkenhaus was not yet open in the morning, I hoped to get a coffee in Torfhaus; and so it was. As I drank the cappuccino, I took a look at my aprs.fi app on the iPhone and discovered an OM who had parked his motorcycle only a few meters away from me and sent out his location via APRS. Curious, I looked to see if I could identify the right moped among the several parked there. Indeed - at one of them a small antenna was to be seen. I approached DM5UE who was standing next to his vehicle and we had a very nice conversation. Many thanks at this point to Uwe for the nice contact!

After a short rest, I immediately continued towards Wurmberg, which I should reach around 3pm. After 4:42 hours of walking, 24 kilometers and 1000 meters of altitude, I reached the summit of the Wurmberg and settled first in the bar opposite the cable car station to enjoy a cool Almdudler. I waited for a short but heavy rain shower, then went to the summit of the Wurmberg and built up there my new GFK mast, on which I hung the 2m/70cm wire antenna, which had already served me well at the last activations.

In total I was able to make eleven QSO’s on 2m FM in a good hour and a half, including some OM’s from a fieldday and also with DK8XY, Torsten, who I had arranged to meet on the D23 chaos circuit when I learned he would also be in the Harz Mountains that weekend. Many thanks at this point to Torsten for the nice QSO and the help with the activation of the Wurmberg!

All in all I was very satisfied: the activation of the Wurmberg was successful at the first attempt!

The next morning I first went to the Brocken bakery in Schierke, where I traditionally have my breakfast since many years, when I hike this “standard round” in the Harz mountains. As always, the sandwiches and cappuccino were delicious and I was well fortified for the climb to the Brocken summit. I took the ascent via the Teufelsstieg and just under 600 meters of elevation later I was at the summit, which presented itself completely shrouded in fog. A strong, freezing wind was blowing and there were surprisingly few tourists to see, although it was already after 10 o’clock.

The wind was so cold and strong that I put on my hat and gloves, and over the hooded fleece I also put on my windproof rain jacket. I set up my GFK mast on the edge of the summit rock and connected my Yaesu FT5-D handheld radio to the antenna. After turning it on, I noticed that I had S9+20 interference on 2m. As a test I called CQ SOTA and heard very faintly a station answering - my first SOTA QSO on the Brocken with DC1OBB. After this first QSO it was clear to me however that I would not get far with these disturbances and dismantled everything again.

Not far from the Heinrich-Heine monument I set up my equipment again and was lucky - no more disturbances - it could go on! The wind became stronger and stronger and it was so cold that it became clear to me fast that I would not hold out here for a long time. Writing down the callsigns in my notebook was impossible because of the cold, so I had to rely on the voice recording of the QSO’s from my Yaesu FT-5D on the SD card to listen to the calls afterwards. I always leave the voice recorder running during SOTA so far, and being able to listen back to the QSO’s after the fact has proven to be very useful.

Already after a few minutes I had the four needed QSO’s together and after good one hour altogether twelve QSO’s “in the box”, among other things with stations from Brandenburg, Hildesheim and Leipzig. Remarkably I had also a QSO with the special callsign DP75HILDE “75 Jahre OV Hildesheim H15” of the special DOK 75H15, which made me very happy! When I started shaking uncontrollably the time for QRT had come. I went straight to the tourist hall of the Brockenwirt to warm up with an Almdudler and a piece of apple pie.

On this day I was 26 kilometers and 600 meters of altitude on the way from Schierke over the Brocken back to Bad Harzburg, looking forward to the successful activations and to the hot shower at home!

External link to the SOTL.AS page of the Wurmberg

External link to the SOTL.AS page of the Brocken