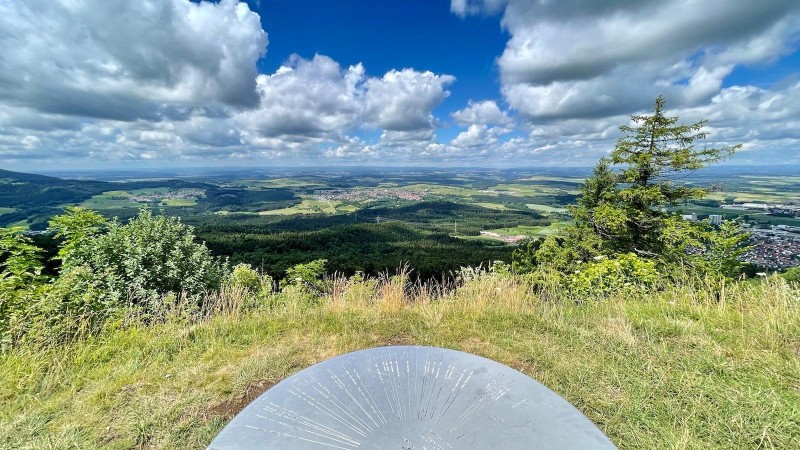 Wow, what a great SOTA weekend!

Actually I wanted to go to the Ham Radio Fair in Friedrichshafen, but unfortunately I could not find a ride despite intensive efforts and the journey by bus & train from my location was so unattractive from the travel time that I preferred to do without. As an alternative I had picked out a few SOTA summits in the near vicinity.

On Saturday I set off for Plettenberg, DM/BW-046. Once there, the actual climb to the summit at 1002 meters altitude was not particularly far. I noticed a cable car that serves as a means of transport for the extracted material from the quarry at the top. At the top I attached a stick I had picked up on the way to a signpost and then attached my 2m/70cm wire antenna to it. After switching on the Yaesu FT-5DE it started immediately. I heard HB0/DL4ROB/P calling CQ from the summit HB/LI-002 (a good 140km away!). That was a good start, I thought to myself. With an “instant” Summit-to-Summit the day can only start well!

That’s how it went on. In total I had four Summit-to-Summit connections and nine QSO’s within one hour on Plettenberg. Compared to my very first SOTA activation on the “Großer Hundskopf” it went very well, which was also due to the fact that this time I worked with an external antenna instead of the small “rubber sausage”.

In the immediate vicinity was another SOTA summit - the “Gespaltener Fels”, DM/BW-147, which I also wanted to activate. So after about an hour I packed my things and set off to hike the nearly 2.5 kilometers there. The little hike was beautiful but in the midday heat also quite sweaty. The view at the split rock was unspectacular and I had my four QSO’s quickly together. A successful day!

On Sunday I went straight on to Lemberg, DM/BW-038 at 1015 meters altitude. At the top of the mountain there is a metal lookout tower, which I climbed to add a few more meters of altitude. Here too, as on the Plettenberg, I attached the wire antenna to a stick I picked up on the way and let it dangle from the railing of the tower.

Up on the tower it was great! The sun was shining, a fresh wind was blowing pleasantly and I set up the technique on a small bench. Shortly after switching on the Yaesu I heard a SOTA activator, DL4YHF/P, calling CQ from the Feldberg. So again, things started well right away!

The needed four QSO’s I had within 10 minutes in the bag, so I was the rest of the time very relaxed on the road and enjoyed the view in between. Altogether I could make 13 very nice QSO’s on the Lemberg, among other things also with travelers of the Ham radio fair, and had three Summit to Summit connections.

As I was already busy dismantling, I heard a familiar sound in the distance - Morse code. A look down from the tower told me that a group of radio amateurs had set up an antenna there and were making QSOs in CW with a portable station. So I was not the only activator of the Lemberg that day. I greeted the group who, as it turned out, were from Holland and wanted to activate a few more peaks on the way back from the Ham Radio Fair. We had a short chat and exchanged QSL cards and call signs. Many thanks to PA0INA, PE1PTS, PA3EIV and PA5KM for the very nice contact!

So that was my SOTA weekend in Baden-Würtemberg. My new external antenna brought the desired improvement and I am very happy with the result. So it can go on!

Read other posts
← The PeerTube instance tube.hamnet.io on HAMNET My first SOTA activation on DM/BW-066 →